On a lake on the outskirts of Rome, Yossarian cast a fly out onto the calm water of the early Latin dawn.

As a founding member of the Pianosa Fly Fishing Club, he’d come to appreciate his furlough away from the airfield and the constant missions over Northern Italy which had now exceeded 50 under the command of Col Cathcart.

He chose a fly and tied it to his leader and then performed a swooping cast and the fly gently landed 30 feet out onto the water. He began to retrieve line slowly and at that moment there was a ripple on the surface and then a powerful strike! The line ran out fast and he drew back hard on his rod and suddenly his prey was hooked. A monster!

*This cap is made to order from the following size options available so please patience is key.

superb, construction, fit and details. Once again, Papa Nui knocks it out of the park.

Thanks John this is one for the ages.

C
Christian B.
One of a kind

The hat is amazing. Completely unique and impeccably made. Thanks again, Papa!

John proposed me a custom visor with this patern and I absolutely don’t regret it! The fabric texture, quality and wrap is also fantastic and make a great fit.
The camo is in the spirit of the Tarnjacke oakleaf patern of the German smock, worn during the battle of Kursk in the Summer of 1943. 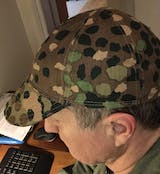 He does in Sf! Love the hat!

As always, Papa delivers. Once again, above and beyond!

I’m loving this one too! Thank you.

It tough me by heart ❤️ reading about the story behind…. Hopefully we catch up one day in Queensland 🇦🇺

One day my friend, thank you!

Indeed it is, enjoy!