As early as 1942, the Navy was firmly in the hands of Admiral King and his dislike of working khakis was legendary. God forbid, it resembled the Army!

King then advocated for a slate grey uniform to be worn as he had long admired the blue grey uniforms of his Allies in the RAF.

Soon he had a tailor work up a naval uniform in a similar grey colour variation made from a Herringbone twill fabric not unlike that worn by the US Marines.

So taken was he by his new idea that he decided to roll it out to the entire US Navy, though it met with much opposition especially from the other admirals and in particular Admiral ‘Bull’ Halsey and the Commander of the Pacific, Admiral Nimitz. This resulted in a limited roll out, however the new colour scheme saw action with Deck crews, PT men,

Responding to Admiral Kings demands, the Papa Nui Cap Co produced this unusual variant cap, the N-3 utility cap in ‘King’ Slate Blue. As the only company to be awarded a contract to develop this new working cap, surviving pieces are rare.

This beautiful style has all the elegance and simplicity of style that it’s A-3 Army counter part has but instead is realised in a Japanese milled mini HBT fabrication with an unfixed dye method allowing a quickly developed patina consistent with the sun drenching of deployment in the vast Pacific campaign.

A cool billiard green poplin under visor keeps water reflection at a minimum whilst  a new all cotton canvas insert allows for the most natural customisation of visor styling to  be set to suit your personal preferences.

Great cap,Nice shape as always.
Love it.
Thanks much

Nice cap,good shape as always.
Love it.
Thanks much. 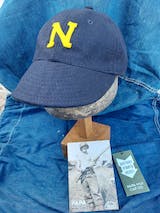 Such a great product, as always a quality item. Plus it gives me a different option from a cap, especially on those extra hot days. 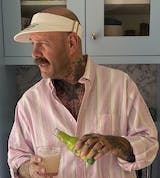 As soon as I saw a preview of the Chesty on IG I knew I had to have it. It’s design is pretty awesome and a beautiful tribute to the classic utility cover without being an exact repro which isn’t a negative thing my any means as it shows that design and originality are on point.
Out of the box the M was a bit snug with the bill flipped up but after my usual soak and wear until dry procedure it fits like a glove.
All in all it became an instant favorite amongst my Papa collection. 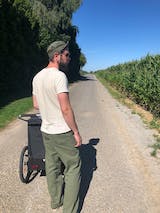